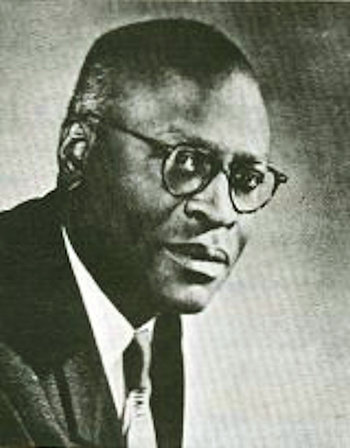 Baritone, composer and educator Edward Hammond Boatner was born in New Orleans, Louisiana, on 13 November 1898. His father, Dr. Daniel Webster Boatner, was a former slave who became an itinerant minister. Edward Boatner was exposed at an early age to the music sung by African Americans in the churches where his father preached. He was particularly fascinated by the spirituals of the former slaves and began collecting them.

Boatner was educated in the public schools of St. Louis, Missouri, and Kansas City, Kansas. Most of his early musical education came from self-training. He applied for admission to the University of Missouri, but the young man’s race proved to be an unbreachable obstacle despite his acknowledged talent. He was entered Western University, Quindaro, Kansas, in 1916, where he studied voice and piano. Despite the strenuous objections of his father–who wanted Edward to become a minister–he gave recitals in the community. At one of these programs, he was heard by tenor Roland Hayes. Hayes encouraged Boatner to move to Boston and continue his studies there. Boatner’s father would not support the venture, so the young man had to work for two years to earn what little he could and make the journey on his own. Hayes helped him make contacts in the city, and Boatner was able to support himself by giving piano lessons. In 1918, Boatner recorded three of Harry T. Burleigh’s spiritual settings, including “Sometimes I Feel Like a Motherless Child,” for Broome Special Phonograph Records, a small African American-owned label based in Medford, Massachusetts. He continued his studies with faculty at the New England Conservatory, and he published the first of his spirituals setting, “Give Me Jesus,” in 1920. 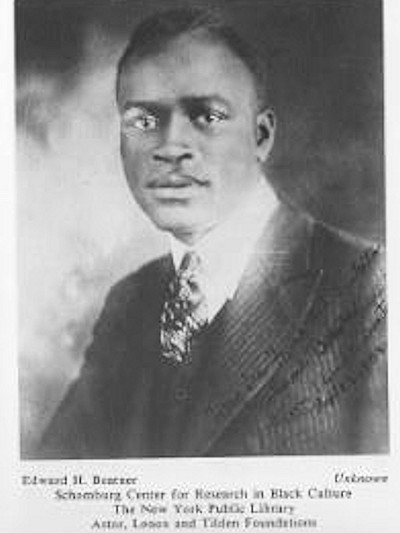 The following year, Boatner received a one-year scholarship to attend the Boston Conservatory of Music, studying German, French and Italian vocal literature. He performed in concert at Hampton University, where he garnered the attention of R. Nathaniel Dett. Dett invited Boatner to tour with him across New England, and Dett became a mentor to the younger man. Boatner relocated to Chicago in 1925. He received his Bachelor’s degree from the Chicago College of Music seven years later. During this time, he served as a church choir director and continued to concertize. He also became director of music for the National Baptist Convention and published his Spirituals Triumphant, Old and New with Willa A. Townsend in 1927. In the foreword of the collection, the compilers explained that many past settings of spirituals had the

…Tendency to get away from the harmony and characteristic way in which the songs were originally sung, and therefore much of their real import is lost. To the end that the ‘old-time’ way of singing these songs may be preserved, is this edition brought forth.1

In the early 1930s, Boatner joined the faculty of two Texas historically Black colleges, Samuel Huston, Austin, and Wiley College in Marshall, where he was appointed their Dean of Music. He returned to New York in the latter half of the decade and opened his own vocal studio. Over his teaching career, Boatner’s students included opera singer George Shirley, entertainers Josephine Baker and Robert Guillaume, Blues songstress Libby Holman, and actor Clifton Webb. He continued to direct church and community choirs. He was a prolific writer of textbooks on music theory and pedagogy, non-fiction–especially on racial issues, short stories, and a novel, One Drop of Blood. Author Gisele Glover speculated that Boatner’s desire to write music books, especially those designed as self-help texts, was a “part of a response to his own difficulties in obtaining music instruction during his youth.”2 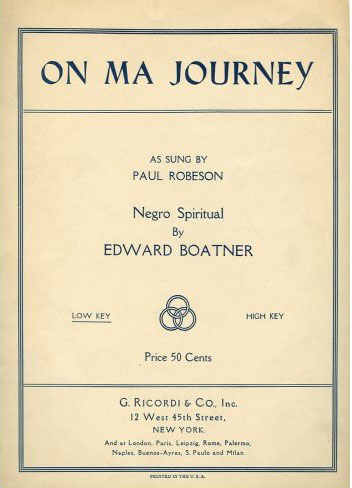 Boatner continued to publish settings of Negro spirituals for choir and vocal soloist. Of approximately 300 works credited to him, some of the best-known are “On Ma Journey” (1928), “Trampin'” (1931), “O What a Beautiful City” (1940), and “City Called Heaven” (1952). A number of these settings were published by his own company, Hammond Music. He published 30 Afro-American Choral Spirituals, a collection for mixed chorus in 1971 and The Story of the Spirituals: 30 Spirituals and Their Origins for voice and piano in 1973. In The Story of the Spirituals, the composer commented about the history of the music:

For many years after emancipation, blacks turned their backs on the slave-created spirituals. Perhaps it was too bitter a reminder of the past. Today there is more ready acceptance of this part of our musical heritage. We certainly should not forget that ragtime, jazz, blues, swing, gospel, rhythm, and rock and roll all have stemmed from the spiritual! Although there have been many Afro-American contributions to the forms, styles and trends of American music, the original and the most beautiful remains the spiritual.3

His compositions were regularly performed by many of his era’s top concert singers, such as Roland Hayes, Marian Anderson, Paul Robeson, Carol Brice, Ellabelle Davis, and Leontyne Price. Contemporary artists who have commercially recorded Boatner’s settings include Barbara Hendricks and Jessye Norman.

Boatner composed an unpublished opera, Troubled in Mind, musicals The Origin of the Spirituals and The Life of Jesus–a work composed of spirituals, text, and dance that was later renamed The Man from Nazareth, and a musical comedy, Julius Sees Her in Rome, Georgia. The Arlington Symphony premiered his Freedom Suite in 1967. He spent over three years researching and composing the work for orchestra, solo voices, mixed chorus and narrator. In an article about the performance at Constitution Hall in Washington, the composition was described as following:

the movements of this struggle from the early days of slavery, through the time of the Negro’s legal emancipation, and concludes with the conflicts of the present civil rights movement… Mr. Boatner’s music is built almost exclusively on Negro folk and hymn motifs. The composer says this reliance upon the common musical literature of the Negro is designed not only to illustrate a major element of cohesiveness in the history of the Negro’s conflict, but also to stimulate further this sense of involvement with the anonymous Negro who originated the music.4

Square-jawed and baldish at 73, Edward Boatner was alert to every sound coming from the 30 black men, women and children crowded into his second-floor Manhattan studio. Softly, slowly, the Boatner Choir sang: “Let us break bread together, on our knees…” His face was wet with perspiration. His horn-rimmed glasses perched at the end of his nose looked as if they would fall off. But his large, black hands, moving with certainty, seemed to pull the mournful strains from his choir…5

Boatner received numerous honors from organizations, such as the National Federation of Music Clubs and the National Association of Negro Musicians.

He married three times and had four children. His eldest, Edward Boatner, Jr., was adopted by another family and grew up to develop his own musical career as Jazz saxophonist Sonny Stitt. Boatner, Sr., and his second wife produced two children, Clifford–a classical pianist–and Adelaide–a classically trained contralto. His fourth child, Sarah, was also musically talented.

Edward Boatner continued teaching into his eighties. He died on 16 June 1981 in New York.

2Gisele Glover. “The Life and Career of Edward Boatner and Inventory of the Boatner Papers at the Schomberg Center.” American Music Research Center Journal8-9 (1998-99): 89-106.

3Edward Boatner. The Story of the Spirituals: 30 Spirituals and Their Origins. Miami, FL: Belwin Mills, 1973.